Every year nearly 500,000 Britons travel to Morocco and the Foreign Office has warned travelers there is a high threat from terrorism in the city after an increase in the number of locals who either sympathize with or belong to international terrorism groups in Syria, Iraq and Libya.
This has been reported in dailymail.co.uk dated 4 September 2015. 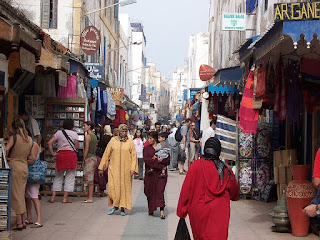 The updated advice has been issued to warn people visiting the African country to be vigilant at this time and, even though most of the trips are trouble-free, the fact remains that attacks could be indiscriminate and could happen in places frequented by foreigners.
The caution makes it amply clear that there is a heightened threat of terrorist attack globally against UK interests and British nationals. These threats come from groups or individuals who are motivated by the conflict in Iraq and Syria. Therefore, everyone should be vigilant.
(Image courtesy wikimediacommons.org)

Some more interesting 'must reads'-


Foolish robbers caught in London - they wore burqas but did not walk like women!!


A street food named jhal muri
A tribute to Kishore Kumar, the legend, on his 86th birthday

Indian kitchens must have ‘besan’