#cairo #egypt #AlHaram #pyramids A bomb attack in Cairo on a road leading to the pyramids has killed nine people - six of them were police officers. It has also injured 10 others. The bomb exploded when a team of officers raided an apartment in the suburb of Giza. It seems the building was booby-trapped and the device went off when the police attempted to defuse it.
This has been reported in dailymail.co.uk dated 22 January 2016. 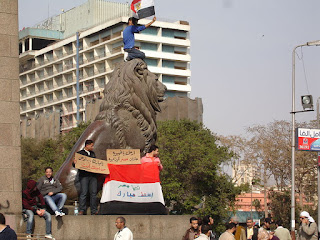 Police have blamed the blast in the Al-Haram district on the blacklisted Islamist Muslim Brotherhood movement of ousted president Mohamed Morsi. It seems a group of Muslim Brotherhood members were preparing to carry out aggressive acts in the coming days and would be using explosives and crude bombs and wee making use of an apartment in a Cairo building. The police raided the apartment and discovered a number of crude bombs. However, when the bomb squad expert was dealing with one of the bombs, it went off.
Islamist militants have stepped up attacks on Egyptian soldiers and police since the army toppled Morsi in 2013 which came after mass protests against his rule and the neighborhood of Al-Haram has witnessed a number of attacks and gunfights since the overthrow.
The building housed many of Morsi's sympathizers and used to be a regular venue for clashes between his supporters and security forces in the aftermath of his ouster by then army chief and now President Abdel Fattah al-Sisi.
Moreover, the district also houses hotels that are frequented by tourists who come to visit Cairo, given its proximity to the pyramids.
The explosion came ahead of the anniversary of the 2011 revolution that ousted longtime autocrat Hosni Mubarak and security forces have interrogated residents and searched more than 5,000 homes in central Cairo as a 'precautionary measure' in order to prevent street protests on the anniversary.

Moody hates to be cowed down by cows (satire)

Walmart surrenders to Amazon, decides to close down 269 stores in the US and Latin America

Mass burning of all cigarettes in Turkmenistan to stamp out smoking


David Bowie succumbs to his 18-month battle against cancer

Kangana Ranaut learns horse riding for her role in ‘Rangoon’