#paristerrorattack #jihadists #syria Mastermind of Paris terror attacks had entered Britain through Dover easily and fresh fears have been raised over the existing border controls at Britain's ferry ports. The terrorist was the ringleader of the terror cell which slaughtered 130 people in the French capital in November and he was subsequently killed in a police raid on his hideout.
But the fact remains that French investigators have found that he had traveled to the UK earlier last year and had photos of British landmarks on his mobile phone. The apparent ease with which the he entered the UK - in spite of being the subject of an arrest warrant by Belgian authorities - has led to criticism of Britain's border guards and security services. Belgium had, in July last year, sentenced him in absentia to 20 years in prison for recruiting jihadists to fight in Syria.
This has been reported in dailymail.co.uk dated 11 January 2016. 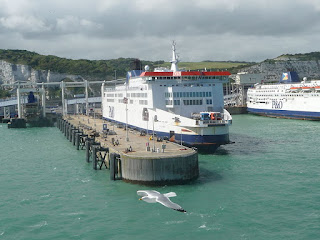 Britain would need to conduct an urgent review of border security at ferry terminals and, simultaneously, provide urgent reassurance that passports are being properly checked on exit and arrival in the UK. The terrorist is supposed to have gained entry into Britain through the port of Dover in Kent. The dates of his arrival and departure have not been given.
It may be recalled that during the attacks in Paris in November, he had killed up to 20 people in cafes and bars with an automatic rifle before he went to the Bataclan concert hall. Once there, he directed the murders of another 89 men and women. CCTV images showed him calmly making his way around the city while the carnage unfolded.